From the Harvard Business School Working Knowledge newlsetter, here is how the executive summary of “Why Sweatshops Flourish”:

Everyone agrees it is wrong to buy things made with sweatshop labor. Yet many of us are willing to justify our decision when a product—a pair of jeans, for example—is something we really want.

Bolding is mine. No. Not everyone agrees it is wrong to buy things with sweatshop labor. In fact, most of the field of economics regards sweatshops as a good thing. The authors are clearly blind to this.

Next, participants responded to four statements, each of which draws on some of the common moral rationalizations used to justify sweatshop labor such as: “The use of sweatshop labor is OK because otherwise those workers would not have jobs”; “Without sweatshops, poorer countries couldn’t develop”;

These aren’t moral rationalizations. The first one is very factual. It is telling that they don’t bother to define what sweatshop labor is. The vast majority of what we consider “sweatshops” are not slave labor. They are mutually agreed upon contracts between extremely poor people and companies. Sweatshops offend us because we in America are incredibly prosperous. It blinds us to conditions in most of the world. The sad fact is that sweatshops prosper because the options for the employees are even worse. Their other options in life are even more hopeless and desperate. Moral outrage should be saved for the basic living conditions in these countries, not for the capitalistic engine that helps get them out.

Obama is planning to increase foreign aid to Pakistan to somewhere around 1.5 Billion per year. And we are stepping up our demands for them to root out extreme Islam and increase counter-terrorism on the Afghan border.

At first glance, there’s something a little sick about increasing aid to Pakistan. They’ve let Osama Bin Laden (remember him) hide out there for almost a decade, they’ve sold nuclear technology to anyone who will buy it, they haven’t done much to fight Islamic terrorists. And their popular candidate was assasinated, their Supreme Court was summarily dismissed – why are we rewarding that?

But paying someone else to do the dirty work is a good strategy. How much would it cost us to keep going into Pakistan and root out terrorists? For comparison, the supplemental budgets for Iraq were 661 Billion dollars. If we can remove Pakistan as a haven for the terrorists for less than 10 Billion, we have made a great deal.

(Of course the kicker is that Pakistan has to follow through on it’s end of the deal. Understandably, they just want a blank check. “For years, the United States has simply paid bills submitted by the Pakistani government for counterterrorism operations, even during truces when its military was not involved in counterterrorism. Pakistan has resisted linking its aid to specific performance criteria and officials acknowledged that developing those criteria could be problematic.”)

Getting the best of tech support

German police have been tracking a nefarious serial killer for decades. The DNA has turned up at 39 murders. Oops, turns out it’s a worker in the plant that made the DNA cotton swabs.

Fireman dresses as Spiderman to save autistic boy on ledge

What kind of crazy unit of measurement is CNN using?

A fascinating account/explanation of hypothermia.

Doctor has heart attack during surgery. He keeps going, knowing his patient won’t recover if he stops. Wow.

Press corps: “But Mr. President, why did it take you days to come out about the AIG bonus mess when Cuomo was on it immediately???” Obama: “Because I like to know what I’m talking about before I speak. Next?” Press Room: “Oooooooooh..”

Did I play this right? Let’s just skip to the key hand. We’re two hours in. I have exactly 2,500 and blinds are at 100-200. I’m on the dealers right. I have been quiet for a long time. Players have been respecting my raises.

I have Qd-Jd. Instead of calling, or putting the standard 600 in as a raise, I put in 800. I want to pick up the blinds. I figure no one will call unless they have premium cards. Unfortunately, the small blind raises it up to 2,000.

Question 1: Was my initial bet okay? Was it overly aggressive, or did I just get unlucky?

Question 2: Was that the right fold?

It didn’t take long after that. A few hands later I raised it up to 600 with A-9, again hoping to get some blinds. I had two callers and the flop was A-x-x. With only 1,100 more to play with I had to go all-in and hope no one had an Ace with a higher kicker, even though I suspected someone did. Yep, I was called with A-J and knocked out.

I still can’t decide if I played it wrong. I think I was just unlucky enough to run into premium cards at the exact wrong time. Either way iIt was not an auspicious start to the new year of poker! I have decide to reset the running total.

Here’s one of my favorite weird moments from Futurama. The aliens have announced they are coming to Earth and are going to eat all the humans.

We will begin with the firemen, then the math teachers, and so on in that fashion until everyone is eaten!

The joke is figuring out what “in that fashion” means. What possible ordering could start with firemen and then proceed to math teachers?

In a business meeting yesterday everyone in the room introduced themselves and listed their hobbies. This was one co-workers answer:

I’m into cycling. I’m learning guitar and into music. Fine arts, stock-trading, all that stuff.

All that stuff? What’s the next thing on that list?

Ben Stein’s column in The New York Times is a joke. Each one is stupider than the one before it. But in a crowded field of dumbness, this weeks column rises to the top. It is a defense of the business trip. The whole masterpiece is worth reading, but here’s a couple choice paragraphs:

Like other taxpayers, I hate to see my dollars going to entertain employees of bailed-out companies lavishly. Just as a matter of public decency, it is possible that they should wear the hair shirt for a time — although it’s hard to see what business purpose is served by punishing the most productive employees at a company, who are often the ones at business gatherings.

It’s funny that he thinks telling top executives that they shouldn’t take lavish business trips at the taxpayers expense (he’s referring to the AIG trip here) is a punishment. And that they are the most productive. Really? These are AIG’s top people? The ones who wrecked our economy and will have our children in penury for the next century? I’d hate to see their bottom people.

At the gatherings I attend, men and women fly coach, stay in immense, boxy hotels, start their meeting days at breakfast at 7 a.m. and work through the day until far later than seems reasonable to me. Then they do it again the next day and the day after that, finally enduring the torture of waiting at the airport, next to screaming children, in order to get home.

Wah wah! Oh, poor Ben Stein and poor hard working corporate America! Truly I can’t imagine anyone else in America who has to work long hours. It can’t be poor people, everyone knows they’re all on welfare. Oh, and their workday starts with breakfast. In a hotel. With meals paid for. The actual work is… talking and meeting and listening and socializing and learning. No, it’s not always easy and it can be a long day. But let’s get real, a long hard day of white collar corporate work is absolutely nothing compared to a long hard day of manual labor or even working retail. And next to crying babies on the airplane – will someone have mercy on these poor people?

Someone give Ben a pacifier and let him sit in a corner while they give his column to someone who still lives in reality.

A sitcom map of the US. See, this is why the internet was created.

My life with cables

You and your research: A great essay on what separates great scientists (and other great people) from the merely good.

Scene from the recession. 33 Pictures of bad times.

Vladmir Putin (then KGB) posing as tourist with Reagan.

She tried to flush the baby down the toilet in a Wonderbread bag. Then it got weird.

The origins of 8 high tech names.

I first saw this in a long New York Times magazine piece about Newt Gingrich. Last week a Republican friend of mine (yes, I have a few) asked me about it. This article is well-worth reading in full.

Frum is not the only Republican on the case. “If you want a quick answer to the question what would I do,” Mitch McConnell, the Senate Republican leader, said recently, “I’d have a payroll-tax holiday for a year or two. That would put taxes in the hands of everybody who has a job, whether they pay income taxes or not.” Other Republican politicians and conservative publicists have made similar noises. They haven’t made it a rallying point, though; it would, after all, shape the over-all tax system in a progressive direction.

A tax holiday on payroll taxes is a great idea. It is a much more focused and effective stimulus program. It’s interesting that for all the talk of conservatives about the government taking “your” money, they have only focused on the income tax, and most heavily on investment income. I’m sure that’s coincidence.

Snarkiness aside, this is a worthy idea that I hope becomes a rallying cry of the GOP.

Some days it’s hard to tell. I got an email promoting “The Webinar Webinar”.

Update: Consarn it, where’s the link? I can’t find it. Anyhow, it was an email promoting a webinar that would tell you how to use a webinar successfully.

I always thought these categories were clear.

It turns out there’s a lot of contention about some of them. Some people even argue about a “couple”. Some people are dumb. 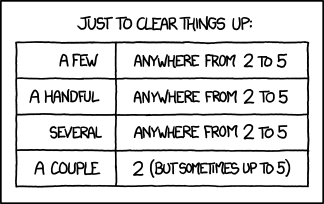 We recently refinanced our mortgage. We changed from a 20-year to a 30-year loan, and reduced the rate by one percent. Along the way we talked to three different mortgage brokers as well as our mortgage holder, Wells Fargo. Wells Fargo was the worst of the lot. They couldn’t even come close to the rates I was getting offered in other places. I found this odd, since they knew better than anyone what a good credit risk we were.

We just got a letter from our new lender. They have sold our loan. Guess who they sold it to? Wells Fargo of course.

I don’t understand the Wells Fargo decision making. They had a good customer in me. They sent me mailings every month urging me to refinance. When I did talk to them, they had horrible terms. But they were willing to buy my loan from someone else. I imagine they had to pay some upfront money to do so. The new loan is on terms much less favorable terms to them, and it’s the exact same customer as they already had.

It’s been a dreary weekend. Rainy and wet and raw. Finally the three-year old reached the breaking point.

“It is too wet! When I get to heaven, I am going to bite Jesus!“