Uch. The worst part is that it’s so sincere.

Update: Had to take down the .mp3 file. Ironically enough, so many people took this file that it brought the site down. It’s like 10,000 spoons when all you need is a knife.

Now that’s just mean. And this takes brass ones.

The people of Walmart

Make up your mind

Trolling is an art. (You have to know internet culture well to get this one.)

The pills are working. A very sad cartoon.

Teaching a friend about the internet

How hard is sarcasm? Chandler Bing must be a super-genius.

Man leaps into river to escape his wife’s nagging

A cognitive scientist on Who Wants to be a Millionaire.

I feel like I should say something. I was a big fan of Kennedys. He lived by his brother’s words “For of those to whom much is given, much is required”. None of the Kennedy’s ever needed to lift a finger for anyone else, they were born with everything. Nevertheless, they all entered public service. Despite their many flaws, each of them left the world a better place for their efforts. Very few of us can say the same.

Today, tens of thousands of mourners are out in Boston. I would not be a bit surprised if there’s another zero on that by the end of the day.

Random Ted Kennedy story: My father was in the same Harvard class as Ted Kennedy. For most of his life he has hated Kennedy with a passion. Not only does he disagree with him politically, but he knows the Kennedy cheated on that Spanish test. Here’s the crazy part: My father (like me) has almost no Boston accent. But whenever he talks about Ted Kennedy it comes back. “That ahshole! That bahstahd!” My father almost never swears either, so it’s doubly funny.

If you divide the top graph by the bottom, you get something useful. But I’m not sure what. Something like the government revenue that comes in divided by the money that’s spent? Is the light blue line on the first graph the same as the second graph? I think maybe it is…

I had a plan going in. Or at least something to work on.

Objective: Play less hands. On the hands I do play, play them more aggressively.

I achieved my objective. It worked well. Every hand I played I felt confident I had the best hand or could bluff the other folks out. I did.

But I didn’t get many cards. I suppose I got fair share of A-J and K-10 sort of hands. But I never saw a pair over an 8, I never had a hand that was an obvious “get all the money in the post” kind of hand. Every time it was a decision. That’s good for practicing poker skills but not for actually winning.

There were two mistakes I made. Near the end I had 10-9 suited in early position. I was thinking that if I raised the blinds I was pretty sure I could steal it. The problem was that the blinds were at 200-400 and I had 2400. So raising would cost me half my stack. I decided to just call. The flop was 10-x-x. I called the 850 all in bet and lost to the 10-J. That knocked me down to 1,200. I was annoyed – if I had trusted my read and raised pre-flop I would have stolen the blinds. Still, tough to risk that much.

The most frustrating part of the night was the pace. We were getting in about 8 hands a round. There is one guy who always forgets to shuffle the deck. It’s not malicious, he’s just a space case and forgets that it’s his job to shuffle the deck after dealing. So we always have to wait. On three different rounds that cost me when the blinds went up due to his delays. Other people weren’t much better. Aimlessly sitting around when they are the dealer, not realizing it’s their turn to bet, etc. It’s one thing if it’s a social talkative night, that’s part of the fun. But this was just annoying. And as small stack, it killed me.

Unlikely hand of the night I was involved in: At 100-200 the blinds are raised to 650. I have A-J. The raiser has been raising a lot and could easily have something weak. I decide to call, hoping to bluff him off post-flop. We get one more caller behind me. The flop is J-x-x. The initial raiser puts in 1,000. I only have 1,700. I still half-think he’s weak, or at least has a worse kicker than me. I push all-in. The player behind us thinks for a long time and finally folds. It turns out that all three of us had A-J. What are the odds? It also shows the kind of night I had. I split the pot and earned the split of the third players money, but I had to earn it. I had to make a tough raise to eke out even a little profit.

Unlikely hand of the night I wasn’t involved in: The two big stacks raise and re-raise each other pre-flop and eventually both of them go all-in. They each had pocket aces.

Now the blinds were at 300-600. I have 1,600 left. I have to make a move before the blinds get to me. In dealer position I have a pair of 8s. Someone else has bet it up to 2,400. Close call for me. If he has two high cards I want to call and play out the coin flip. If he has a higher pair I am screwed. I decide not to risk it, he told me that he had two high cards. Dang. A few hands later I went all-in with Q-9. I felt like I had no choice. I was called by A-7 and got knocked out.

Oh well, that’s how it goes. It was a fun night. For the most part I thought I played well. Heck, throw in one more strong hand and I would have had enough chips to start making a difference.

We’ve had the Delta American Express Card since 2001. We’re done with it.The rewards it gives are frequent flyer miles, one per dollar spent. That’s not good enough. Why?

It was time for a new card. The last time I tried to cash in miles started the ball rolling. My Vegas trip in March cost almost as much as if I had paid the normal fee. I was finally triggered to take action by an interesting article in the New York Times that had some specific suggestions. I sat down to figure out what we wanted in a new credit card.

What were the criteria?

The next stop was Mint.com. This is a personal finance site. They make most of their money by making you offers on financial products like credit cards. The neat part is that they already know your financial situation. They can make recommendations based on true knowledge of your spending patterns. Sure enough, once I filtered out the “sponsored listings” I was left with the same two choices as before. Because it knows what I spend my money on it can make informed estimates of how much I can expect to save with each one. Costco came out barely on top. But I didn’t trust their numbers. I ran my own.

After 10 minutes of furious scribbling, I decided that the BlueCash card would have an approximate 1.6% rewards rate, and the Costco card would have a 1.4%. However, that was highly dependent on how much spending we did every month. Which is highly variable for us. With only slightly different assumption the Costco card looked better. And frankly, we like Costco. That’s what we applied for, our new cards should be here in a couple weeks.

What do you use for your credit card? And why?

That’s the slogan of Joel and Associates.

These make me giggle

Total Eclipse of the Flow Chart

Scottish man at U2 show

25 thinks I promise never to put my child through

Ow! That isn’t how it’s played.

Are you a white collar criminal unsure how to cope with going to jail? These consultants can help. (not a joke)

Well that sucks. DNA evidence can now be fabricated.

A simple visualization of how health care reform will affect you. 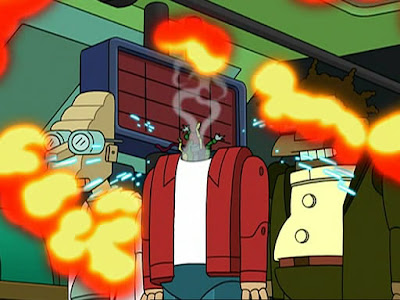 An hour later I had about 2,800 with the blinds at 200-400. The blind was raised to 800. I went all in with A-Q. I was not expecting to be called, but he had pocket Ks and knocked me out. I think the all-in was the right play, and I certainly can’t complain about luck after that river 9 before.

This Week:
Man, that sucked. I went in determined to be (1) aggressive early, (2) play the players not the cards, (3) get an early big stack and use it. It started off great. The very first hand I had K-A and added a few hundred to my stack. Two hands later I had Jack high but pushed around someone who was radiating weakness. Things looked good. Until..

Blinds at 50-100. Everyone folds to me in the small blind. I have K-J. With only the big blind left I raise it up to 400. He calls. The flop is Q-x-x. I don’t think he has the queen. I bet another 400. He thinks about it and calls. The turn is a Jack giving me a pair. I bet 800. He quickly raises me another 800. There are 3 diamonds on the board. He’s caught the flush. I know he’s caught the flush. I have to fold and I do. He had K-3, and yes, they were diamonds. Son of a. I’m surprised he called the preflop 4x raise in the first place. After that he was just lucky.

Now I was short-stacked and everything went wrong. I was quickly knocked out and rebought. Ha ha, I thought, a new stack of chips, look out here comes Muttrox! It was not to be. I didn’t get good cards. Everytime I made a move someone came over the top. When I had good cards they didn’t connect on the flop. Nothing worked. It’s not even worth relating the final hand, it was anti-climatic and preordained.

That was a couple of the most frustrating hours of poker I’ve played.

And yet more poker…: That flush hand is really sticking with me. I am still annoyed because I think I may have been Helmuth’d. I raised the blind 4x and he called with K-3. That was a defensible, but bad call. In my opinion. The only part I may have done wrong was only betting another 400 on the flop. He was calling 400 to get 1600, and he had about a 35% draw chance so it was an ok call on his part. I suppose I could have bet 1,000 or something, but I didn’t even have a made pair. I just had a read, an absolutely perfect one, that I had him beat. It would have been hard to commit 25-50% of my stack on that read. Nyargh. I’m not sure why this one hand is bothering me so much, but it is.