Press this in dire situations.

The origin of evil

What to do if I’m murdered

Why did Sauron attack Middle-Earth? Self-defense against Gondorian aggression!

They’re going to expect more of you

How a stray mouseclick cost a bank $150K and chocked the NYSE. Adventures in poor user interface.

Lunch notes from my wife

Cooper Manning, the other Manning brother

Before they were too big to fail.

Using the zero-rupee note to fight corruption in India. When psychology meets corruption.

The fake freeway sign that made the roads better

Dirty Harry has a problem

The dungeonmaster of the rings

This poor guy – and so funny

Printers are from hell

That’s how it happened, street life

What? You were the Joker, right?

The 4 myths of profile pictures

He calmly announced his own murder, and almost brought down the president of Guatemala. Then it got weird.

Saint Elizabeth and the Ego Monster: The downfall of John Edwards

My little girl is 20 months old. I just got a call from the wife. She is singing along to Who Are You. I love my kid!

And as usual, for no reason, here’s a bonus track. The very cool demo version of “Athena”. I love the funky guitars.

Wow. That was a fun night, fun people, but boy o boy, the poker is just ridiculous. Plenty of good starting hands, plenty of good flops, and yet I was eliminated in 35 minutes flat. It went so fast I didn’t have time to pay for my Coke, I had to track down a waitress on the way out.

The third hand I have A-10 suited. Again I raise. The flop is 6-8-J and there are two hearts. I raise again. Still two callers. The turn is a 4. The river is a 5. No hearts. There is a raise. She’s got the 7 for the straight, I can tell. I fold. Yes, she had Q-7. So did the other person. Both fo them stayed in for 3 raises and hit inside straights.

The fifth hand I have to fold my pocket sixes to big raises after a flop with two overcards with 3 players in the hand.

I am now short stacked. I have A-9. I raise preflop and get one caller. The flop is A-8-5. I got all in with my last 300. I am so excited that I knock over my Coke when I’m pushing my chips in. Soda all over the place, but mostly on me. Son of a gun. He calls with pocket 9s, and I double up, though I’m still short-stacked.

(They are supposed to give me bonus chips for ordering something, even if it’s only a Coke. Where’s that lady with the bonus chips, I need them!)

The next hand there are three limpers, and I look down at pocket Aces from the big blind. Yes!! I raise it up to 150, they all stay in. The flop is K-x-x. I slowplay it with a check. I figure one of these three will have a King and raise it. Yep, she puts another 150 in. I go all in, another 520. The first raiser thinks about it. She has a big stack and what the heck, she calls. The second player has no idea what’s going on and randomly throws her chips in. The first player turns over K-Q (yes!), the second player K-6 (yes!). All I have to do is avoid queens and 6s. I am roughly a 75% favorite. The river is a 6. The clueless dumbo wins. Talk about being Hellmuth’d! I have no beef with the first player. Top pair and a queen kicker, of course you call. But the second player had top pair with a weak kicker and two all-in players in front of her. She should have folded, she didn’t, and she tripled up.

At least the second player didn’t have quite enough to cover me, so I have 220 left. Blinds are now at 20-40. I’m in the small blind on the next hand. With two limpers I look down at A-Q. I go all-in. I get knocked out.

I mean, c’mon! This just ain’t right. That’s six hands with good cards. Only two of them connected (you would expect about 50% to), and of those two, one was a monsterous bad beat with pocket aces to a know-nothing. Geez, I just can’t win this year.

That was the most frustratingly unlucky night of poker I’ve ever had. I didn’t whine at all about my lack of cards in the neighborhood Tournament of Champions, but I am now.

Here’s really the kind of night it was: Time was running out for rebuys. With a small stack I knew I was going in. I would either double-up to a moderate stack, or rebuy for a moderate stack. But I couldn’t even get playable cards. In two orbits around the table I never saw a card higher than an eight. But what’s this? With time for two hands left, I get a Q! I go all-in and I am knocked out. Hey, that’s okay. That’s fine. I get my new batch of chips and sit down for the last hand before rebuys are over. Two players limp in. I look down at pocket kings. Holy cow, real cards! I go all-in. The guy to my left says what the hell and calls me. He has J-2. I like this guy, I really do. He’s completely unpredictable, impossible to read, and generally a lot of fun. Why did he call? Either as a pure what-the-hell, or he didn’t realize I had just rebought and figured I was going in with anything. At any rate, I have pocket kings vs J-2, so I have an 5:1 edge. The board gets 3,4,5,6, his six high straight knocks me out.

It’s a miracle I lasted as long as I did. I’m pretty sure the only hands I won the whole night were from raising pre-flop and stealing the blinds.

Oh yeah, and I was paying a babysitter to watch the kids the whole time. Ugh!

Can you be a music critic and not know The Beatles’ “A Day in the Life”? I’m a bit of a classic music snob, but I think this is basic knowledge for anyone who makes their living reviewing music. It’s one of the top five songs by the most influential band in rock and roll history. We’re not talking “the name escaped me”, or “oh yeah, that song”, but someone who has never heard the song in their life, and reacts to the orchestral breaks with, “oh, that’s neat.” Can you be a professional music writer and not know this song?

As long as I’m talking about it, here it is. Plus a great live performance of Jeff Beck’s version afterward.

On the other hand Matt thinks I have to know I’ll Follow the Sun, which I think is too obscure.

I started as big stack, with about 20% of the chips in an 8-person table. After an hour that was closer to 25 or 30%. Then it started going bad. I’m still not sure how. Hands like this I suppose.

I have Q-8 as dealer. What the heck, I’ll raise and see what happens. I get a caller, and the flop is J-10-8. He raises. I have an inside straight draw and bottom pair. I have outs, and he may be completely bluffing, ok I call. The turn is the same kind of logic and I lose a bunch by the time I am forced to fold on the river. I suppose I shouldn’t have played the Q-8 in the first place. Another time I go in with K-10. The flop is 4-5-6 and the same guy raise big again. Argh! A few hands like this and I am just one of the players, no longer big stack. (As it turns out he had big hands on both of these so my eventual folds were correct.)

Oh yeah, I almost forgot. I had A-9. The flop was 10-9-x. I bet, was re-raised and called. The turn was… I don’t know. I forget. Anyhow we got to the river (another 10), he raised big again. I there were a lot of things that could beat me, but the betting pattern didn’t add up. I called, he had a set of 10s. The betting pattern didn’t add up because he changed to slowplaying me in the middle and I fell for it. Dang.

The key hand of the night:
I am big blind. The first person, who is short-stacked. goes all in. Everyone folds to the small blind, who also goes all-in. I have K-Q suited. It’s about a third of my stack. After thinking it through I decide I can afford to go in and see what happens. A win on this hand puts me back in control. I also call.
The flop is Q-x-x. Small blind checks. I am sure I have the best hand. But.

1) Should I have played the K-Q in the first place, or just let them fight it out?
2) When the queen came up, should I have checked with the top pair, or made a big bet to push out the small blind?

After that, things just didn’t go well. I didn’t get any good hands, didn’t connect on any flops, didn’t have enough chips left to push people around. The end was anti-climactic.

My VP at work knows I’m a big Patriots fan and gave me this sweet mini-helmet, signed by Tom Brady. 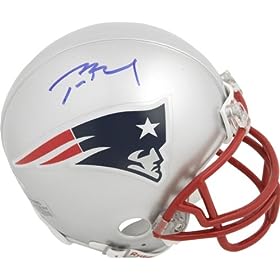 It’s a good thing we don’t keep a gun in this house.

For the second year in a row I won our regular season and get eliminated in the first round of the playoffs. This is, to put it mildly, very annoying.

I started the season with high hopes. My core of four players was incredible. I had to trade away Wes Welker and Donald Driver, but I got second round picks for them. My draft was unremarkable, but solid.

Or so I thought. It soon came out that dumping Welker was about the dumbest possible move. Terrel Owens sucks. Roy Williams sucks. Greg Jennings is okay. Outisde of my big four, my only good players were Tony Gonzales and Vince Young. And I couldn’t even play Vince Young, we have a 1 quarterback 1 flex league, and both those spots were filled with Drew Brees and Philip Rivers each week.

It was an achievement to win the regular season. I actually finished 8th out of 12 in points scored.

Damnit. I want to at least get to the second round next year.

Danny DeVito will do another season, if…

I’m getting some pussy one way or another

The Golden Gate bridge, from a plane

The science of willpower. Very relevant to New Years resolutions.

Parents do not belong on Facebook. But Star Wars does!

The Rock is horrified

The dumbest product ever, bar none.

Coming up: The future

This is very long, but worth it. The story of the best winless high school football team.

Anti-whaling group split off from Greenpeace in 1977 or so. They built one of the fastest boats in the world. Then they confronted a whaling boat. See what happened next.

14 Terrorists blow themselves up by accident. Nice.

After three years living in China, James Fallows shares his thoughts on whether America is in decline. Long, but worth it.