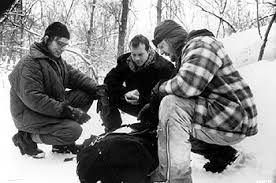 A common trope in movies is the suitcase full of cash. Sometimes it’s the protagonist stumbling across it (No Country for Old Men, A Simple Plan). Sometimes it’s for ransom.

But whenever you see it, the suitcase is full of cash. A briefcase is filled right to the brim, in neat piles that all happen to add up to the correct amount. A duffel bag is bulging. Have you ever found a scene where the briefcase is filled most of the way, but not quite? No, it is always filled up 100%. Whoever is filling that briefcase must go through a lot of math to get it figured out. “Let’s see, my suitcase has these dimensions, a packet of $100 bills takes up so much space, I need to get this much total money… maybe if I replace 3 packs with 20 dollar bills instead… or get a bigger suitcase… Argh, I wish I had paid attention in Algebra II, I’m sorry Mr. Koetke!” 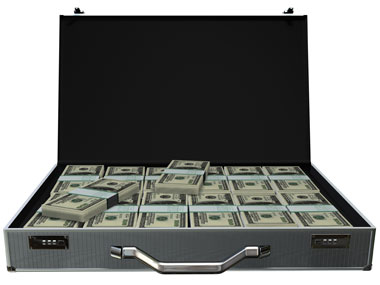 This is a picture of my new washer being installed.

Picking on business-speak is easy. But there are some good business terms. One of them is actionable. Actionable draws a distinction between knowledge that is interesting and knowledge that drives a decision. You wouldn’t want to fund an expensive research study that isn’t going to drive some action. You wouldn’t to do an analysis that will just end up in a drawer somewhere. It is only worth doing if it will drive some kind of action.

Someone who understood this was Sherlock Holmes. The below excerpt is from his first adventure, A Study in Scarlet.

His ignorance was as remarkable as his knowledge. Of contemporary literature, philosophy and politics he appeared to know next to nothing. Upon my quoting Thomas Carlyle, he inquired in the naivest way who he might be and what he had done. My surprise reached a climax, however, when I found incidentally that he was ignorant of the Copernican Theory and of the composition of the Solar System. That any civilized human being in this nineteenth century should not be aware that the earth travelled round the sun appeared to be to me such an extraordinary fact that I could hardly realize it.

“What the deuce is it to me?” he interrupted impatiently; “you say that we go round the sun. If we went round the moon it would not make a pennyworth of difference to me or to my work.” “You see,” he explained, “I consider that a man’s brain originally is like a little empty attic, and you have to stock it with such furniture as you choose. A fool takes in all the lumber of every sort that he comes across, so that the knowledge which might be useful to him gets crowded out, or at best is jumbled up with a lot of other things so that he has a difficulty in laying his hands upon it. Now the skilful workman is very careful indeed as to what he takes into his brain-attic. He will have nothing but the tools which may help him in doing his work, but of these he has a large assortment, and all in the most perfect order. It is a mistake to think that that little room has elastic walls and can distend to any extent. Depend upon it there comes a time when for every addition of knowledge you forget something that you knew before. It is of the highest importance, therefore, not to have useless facts elbowing out the useful ones.”

Sherlock Holmes, in “A Study in Scarlet”

Incorrect understanding of how the brain learns and memorizes aside, what he is saying is that the knowledge that the earth goes around the sun was not actionable, and therefore not needed.

One dimension that actionable takes place on is time. A bit of knowledge might be useful, but not for a few years out. Another dimension is tactics vs strategy. A piece of knowledge may contribute to a better understanding of the big picture, leading to a change in strategy. Businesses will fund research that doesn’t drive any immediate actions, but will help them develop long term strategies. Just because you can’t see the immediate action something drives doesn’t necessarily mean that is is pointless. However, it is very helpful to force yourself to explicitly consider what decisions will be driven from knowledge. If you can’t come up with any, that should call for re-examination of the effort.

Interestingly enough, Holmes came to regret this attitude as Watson turned the tables on him.

Holmes: “I looked up at the sun. It was low in the heavens, and I calculated that in less than an hour it would lie just above the topmost branches of the old oak. One condition mentioned in the Ritual would then be fulfilled. And the shadow of the elm must mean the farther end of the shadow, otherwise the trunk would have been chosen as the guide. I had, then, to find where the far end of the shadow would fall when the sun was just clear of the oak.?

Watson: I imagine both trees must have grown since the Musgrave Ritual was written, but what do you mean when you say that the sun was “just above the branches? of the oak?

Homes: I suppose it must be a mile or so up to clear the mountains, but I could still tell that it was directly over the oak.

Watson: Do you remember me telling you that the earth goes around the sun? You said you would try to forget it, to leave room in your brain for more important facts.

Holmes: And so I have.

Watson: But the orbit is such that the sun is never directly overhead anywhere in England!

Homes: From where I was standing, it looked like it was right over the oak. So then I just had to locate the far end of the shadow from the elm….

Watson: But surely you’ve noticed that where the shadow of a tree falls varies with the day of the year, not just with the hour of the day? This is a direct consequence of the orbital pattern you were so eager to forget.

Holmes: It’s good that I have you to keep track of such minor details. I hadn’t noticed.

Watson: You saw, but you did not observe.

2010 was a pretty lame year for Muttroxia, and 2011 is even worse so far. But you know, there were a few okay posts here and there….

The readers call me out for an odd poker play

Many posts about our trip to France

I rip apart Bill Simmons for his stupid statistics, and this guy was pretty dumb also.

Fun with kids:
The 4-year old has standards , and he fights God. Here’s a funny story I improvised for them, and a story I stole from my boss.

I just noticed this while I was compiling this post – I have the same complaint about the same website two times! I’d forgotten I’d already complained about it. Man, I really hate those 360 reviews!

During the snowpocolypse (how do you spell that?) last month our family was stuck inside for a week. We were going stir crazy. Finally the seven year old had had enough.

I thought he had a good point. And not just because I had cabin fever.